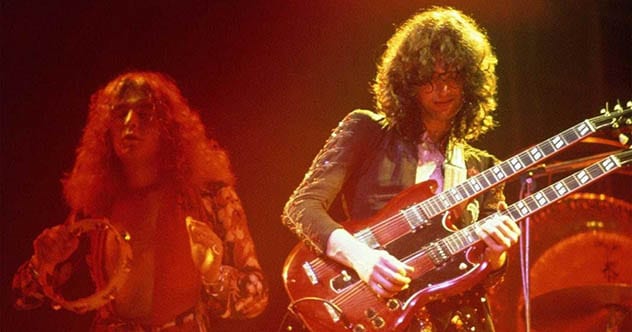 Learning to play a musical instrument takes hard work. Practice, and patience, and more practice. And that can be such a drag. The devil is believed to be very fond of music, which is not surprising. After all, he does have all the best tunes.

Lucifer is said to have a special affinity to stringed instruments, particularly violins and guitars. In exchange for just one soul, any condition, the Prince of Darkness can teach you how to really play that guitar. He can make you a star.

You might think that no one would take him up on this offer, but we have found at least 10 musicians who, allegedly, thought that this was a great deal.

So, why not take it easy on yourself and trade that soul in today. Who has time for scales anyway?

Legendary Led Zeppelin guitarist, Jimmy Page, was a student of occultism for a while. He bought Aleister Crowley’s old home in Loch Ness, which he believed was haunted. He often talked about the strange experiences he had had there.

He followed Crowley’s occultist teachings about focusing your intentions on what you want to get out of life. Apparently Jimmy just wanted to play a mean guitar, and he certainly got that wish.

Lots of people claimed that he had sold his sold to the devil to get such fast fingers, to which Page replied that if had, then so had the rest of the band.

Which is not exactly a denial. This may be the origin of the myth that if you play Stairway to Heaven backwards, you can hear demonic voices speaking.

Niccolo Paganini was both a violinist and a guitarist, so he didn’t stand a chance. Born in 1782 in Genoa, he began learning the violin at the age of 7, and is considered by many to be the greatest violin virtuoso of all time.

He was so much better than his peers that a rumor circulated, and persisted, that he must have sold his soul in exchange for his virtuosity (though not his virtue). It could have been that, of course, or it could have been the hours of practice and his extremely long fingers which allowed to him to play three octaves across four strings, which was unheard of.

His hand span, was probably due to Marfan Syndrome, which typically leads to sufferers being exceedingly tall with long limbs. Paganini, like all music geniuses, used his skills mostly to get girls. He was a great womanizer and was said to trap the souls of young women inside his violin, although quite how he did it, no one ever explained.

One concert goer in Vienna even claimed to have seen the devil guiding Paganini’s arm. Which probably made for interesting conversation during the interval.

Robert Johnson’s is probably the most famous soul in the Devils collection.

Sometime during the 1930s he said to have met the Devil, allegedly at the Clarksdale Crossroads.

He was said to have been a decent harmonica player but a ‘terrible guitarist’. Then he disappeared for a few weeks. He is supposed to have taken his guitar to the crossroads in Mississippi, where the devil retuned his guitar and gave him a few lessons.

When he returned, his terrible guitar technique was now described as ‘formidable’ and ‘masterful’.

When Robert Johnson died in 1938, at the age of 27, the rumor became a fact, and Johnson is now known officially as the Devil’s Bluesman.

Giuseppe Tartini is said not only to have sold his soul to the devil, but also to have composed a song with him. Trillo del Diavolo, or The Devil’s Trill, came to Tartini in a dream. The music came to him, he said, after his dream-self had also sold his soul.

He failed to check the small print on the deal, however, because the music he wrote down when he awoke was not as complex as the Devil’s tune.

Perhaps that’s just as well, however, as the Devil’s Trill is said to be one of the most technically demanding pieces for violin ever written. Although he was a very accomplished musician, he soon discovered that he was not really good enough to play his own tune, and so he had traded his soul for a tune he could not play.

Tartini spent the rest of his life trying to properly master his own tune, which must have been annoying. He was, however, a first class musician, as well as a notorious womanizer, a brawler and an expert swordsman.

John Lennon is famous for saying that The Beatles were bigger than Jesus. So we already knew he was a blasphemer. One Beatles ‘scholar’ however, has spent years interpreting hidden messages and symbols in John Lennon’s music, art-work and album covers, and he believes that he has ‘evidence’ that Lennon actually sold his soul to the devil.

He follows an apparently ‘fascinating’ trail of sorcery, mysticism, numerology and theology to explain his theory, as well the slightly less reliable mystical science of anagrams and listening to songs backwards.

OK, so there is a good chance that this Beatles scholar is a little bit nuts, but then again, who are we to judge? Lennon allegedly signed his pact with Lucifer some time around December 1960, shortly before the first known outbreak of that well-known viral disease, Beatlemania. If true, it seems particularly hard on Lennon, as the other 3 band members, presumably managed to keep their souls intact while still sharing the glory.

Lennon was promised 20 years of success before the devil reclaimed his own.

Usually these devil-soul transactions are shrouded in secrecy. Occasionally, however, a performer comes along who is happy to talk about it. Or even sing about it.

Snoop Dogg admits that at the time he was in a dark place, when he heard a voice say, “Bring your lifestyle to me I’ll make it better”

Mr Dogg asked how long he would live, and the voice cried back, “Eternal and forever.”

Sounds like a good deal. There is some evidence that the artist at first believed that he was making a pact with God, but was tricked by the devil.

Or perhaps, it’s just a song.

In 1968, The Rolling Stones released a new album that confirmed every parent’s darkest suspicions. Rock and roll was indeed the devil’s music. The opening song of Beggar’s Banquet was, of course, Sympathy For The Devil.

Keith Richards told Rolling Stone magazine that some people saw them as “acting as unknown agents of Lucifer while others think we are Lucifer.”

Either way, they were trouble.

Some of their fans, however, really bought into the Satanic Majesties thing (the title of their previous album). In particular, the Hells Angels lapped it up. If it was possible for an illegal biker gang to have an official anthem, Sympathy For The Devil was it. They provided ‘security’ for the Stones at Altamont free music festival.

Trouble erupted during that song, and a short time later a teenage boy was stabbed to death.

Although the song was not directly linked with the stabbing, the Stones didn’t play the song live again for a long time. The Stones have been dogged by rumors of devil worshiping ever since, possibly because of secret messages embedded in their music, or possibly because of the large horned devil’s head tattooed on Mick’s chest.

Philippe Musard was a French musician, composer, and conductor who was known as much for his colorful life as he was for his concerts, which is saying something, because the concerts were said to be chaotic, riotous affairs.

Philippe Musard was the rock star of the nineteenth century.

He certainly had theatrical flair, and loved to shock his audience. Musard was the first conductor to stand up during his performances, and the first to fling his arms around wildly. Sometimes he even threw his baton into the audience. He is credited with inventing the Galop Infernal, frenetic dance tunes that were often used as the accompaniment to the can can dances of the time.

He was phenomenally successful, and Parisian confectioners even sold his effigy in chocolate. While he conducted, he was said to pull strange faces, and to look almost possessed with his wild gesticulations. It may have been this that led to the persistent rumor that Musard had made a pact with the devil.

Tommy Johnson was a blues musician and is the man credited with starting the rumor that Robert Johnson had sold his soul at the crossroads. Which is odd, because, before that rumor got around, it was thought that Tommy had done the exact same thing.

Tommy Johnson was one of the most influential bluesmen in Mississippi during the 1920s and 1930s. His older brother LeDell was teaching him how to play the guitar, when, as a young teenager, Johnson ran away from home to the Mississippi Delta. When he returned 2 years later, he was an expert guitar player.

LeDell Johnson claimed that his brother had met a ‘mysterious figure’ at a crossroads. The stranger tuned his guitar for him, after which he could play like, well, the devil. Which exactly story what Tommy said about Robert Johnson.

Could it be that Tommy Johnson was diverting attention from his own diabolic encounter? Or perhaps the devil spends a lot of time hanging around crossroads with a guitar tuner.

In 2016, Bob Dylan was awarded the Nobel prize for literature. It was pretty much a surprise to everyone. Except, perhaps, Bob. He explained in an interview, “It’s a destiny thing. I made a devils bargain and I’m holding up my end.”

Well that seems pretty conclusive. It shouldn’t have come as a surprise though. Bob Dylan, apparently, died on July 25, 1965. Coincidentally, that was the same day that he walked on stage at the Newport Folk Festival stage with an electric guitar.

An electric guitar. At a folk festival. To make it worse, he was accompanied by a rock band and they launched into a decidedly un-folky rendition of his new song, “Like a Rolling Stone.”

So it will come as no surprise to any of the tambourine shaking, harmonica blowing folk fans that Dylan had signed an unholy pact.

About The Author: Ward Hazell is a freelance writer and travel writer, currently also studying for a PhD in English Literature

Adding Zinc to Your Diet Could Save You From COVID, Study Finds

Who is Yolanda Saldivar? Selena Quintanilla’s best friend who is still in jail – HITC

First look launch of ‘Om: The Battle Within’, Aditya Roy Kapoor in action

Basement Biden to CNN: If Kamala and I Disagree on Principle

MUMBAI: Bollywood actress Madhuri Dixit is rarely seen in films now but she is very active on social media and