Officially nicknamed “The Hoosier State” and sometimes called “The Mother of Vice Presidents”, Indiana was the 19th state to join the United States of America on December 11, 1816.

Illinois is bordered by the states of Ohio, Michigan, Kentucky and Illinois.

The capital of Illinois is Indianapolis, situated smack bang in the middle of the state.

That’s enough fast facts about the Hoosier State for now though, we’re here to learn some real facts!

Indiana means “Land of the Indians.”

Many US states have names whose origins are shrouded in mystery, are based on words from one of the many Native American languages, or have such doubtful origins that no one can agree on a single answer.

Indiana, on the other hand, is not one of those states.

The region that makes up Indiana was originally a part of the Northwest Territory.

This included a great swathe of land encompassing all of modern-day Ohio, Indiana, Illinois, Michigan, Wisconsin, as well as a fraction of north-eastern Minnesota.

In May 1800, the US Congress divided the Northwest Territory, naming the western section the Indiana Territory.

No one is really sure why Indiana residents are called Hoosiers. 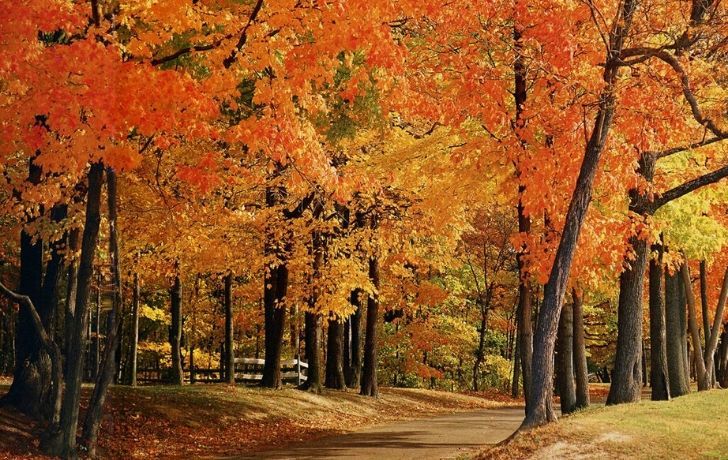 While the origins of Indiana’s name is all too simple, the name its residents apply to themselves is less so.

As the story goes, the term Hoosier comes from the regions of Tennessee, Virginia, as well as North and South Carolina.

It’s said that this term was used to refer to people who lived out in the forests, woodsmen, country bumpkins, and so on.

Indiana has been inhabited since the end of the Ice Age.

At the end of the Ice Age, around 8000 BC, the glaciers in the northern parts of the world started to recede.

It was during this period that the first humans crossed into North America and started to settle further and further south.

These people are referred to as Paleo-Indians, and some of them settled in Indiana as nomads, living off the land and all its bounty.

As time went on, traditions and cultures came and went, but for the most part, the descendants of the Paleo-Indians developed increasingly complex societies.

These societies lived sedentary lives, basing themselves in one location for the better part of the year.

The first Europeans to reach Indiana were the French. 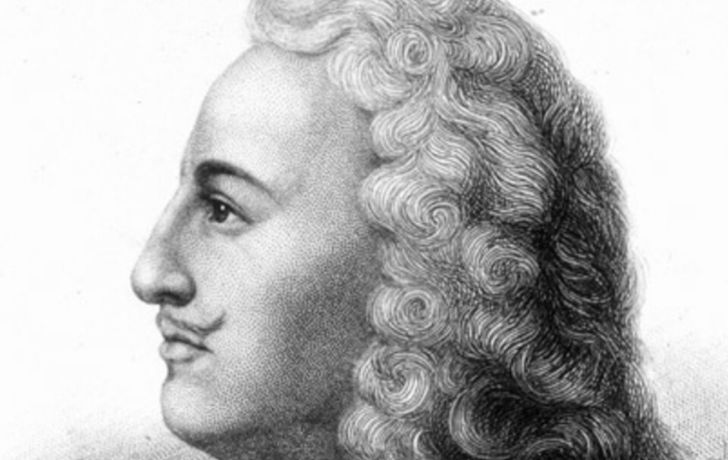 The French Explorer René-Robert Cavelier, Sieur de La Salle was the first to traverse across parts of modern-day Indiana in 1679.

La Salle and his men entered the Indiana region from Lake Michigan, where they paddled along St Joseph River to the site of modern-day South Bend.

At South Bend they carried their boats overland a short while to the Kankakee river, where they then traveled all the way through to the Illinois River, crossing the entire northern section of Indiana, and the midsection of Illinois.

France lost Indiana to the British in the Seven Years War. 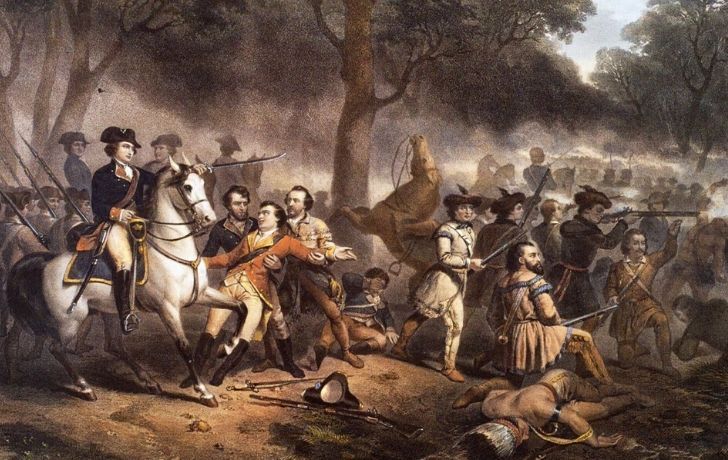 Although the French were the first to establish trading posts in Indiana, it wasn’t long until Britain wanted to get in on the action.

Both France and Britain were attracted to the region primarily because of highly lucrative fur-trading, but at the time weren’t interested in permanently settling in the region.

France entered the region from the north, and Britain crept in from the East.

By the 1750s there were almost continuous clashes between the French and the British.

In the Seven Years War the Native Americans of the region sided with France, and they continued to do so after the region was ceded to Britain after France’s defeat.

Indiana played a critical role in the American Civil War.

Overall, Indiana contributed much to the Civil War effort.

When the call was made to mobilize troops for the war effort, Indiana was the first of the western states to answer.

When the Union Army assigned a meager quota of just 7,500 men to fill the army’s ranks there were so many volunteers that thousands of men had to be turned away.

As the war effort grew more intense, more and more volunteers were accepted, with a total of 208,367 men from Indiana joining by the end of the Civil War.

In the seal the sun is tucked away behind some hills, glistening on the horizon.

In the foreground there is a woodsman felling a tree, startling a nearby buffalo into flight.

Although the state seal has been in use since 1801, it wasn’t accepted as the official state seal until 1963.

The first US train robbery took place in Indiana.

In the 1840s a railway was constructed which connected Indianapolis with Madison, Wisconsin.

Not long after, in 1866, a gang called the Reno Brothers made US history.

On October 6, 1866, the Reno Brothers boarded an Ohio and Mississippi Railway train and broke into a safe, making away with $16,000.

It wasn’t long until some members of the gang were identified and arrested, but they were released on bail.

Indiana truly is one of the great crossroads of America.

Indiana’s official motto is “The Crossroads of America”, and it couldn’t be more true.

The motto originally applied to Indianapolis, as a number of major interstate roads passed through the city.

As Indiana became more connected, with further interstate roads passing through it, the name was adopted for the entire state.

Nowadays, Indiana actually has more miles of interstate road than all the other US states, so the motto still rings true!

Life was incredibly difficult for runaway slaves fleeing for their lives.

They were restricted to traveling at night, holing up in various locations during the day when it wasn’t safe to travel.

Many people, especially in Indiana, felt compassion towards them and sheltered them.

Those homes that did this more often became known as parts of the “Underground Railroad”, as they were like stations on the way to freedom in free states, or even Canada.

One such home was that of Catharine and Levi Coffin, who sheltered and fed more than 2000 runaways over a period of 20 years.

Their home became known as the Grand Central Station of the Underground Railroad as many of the routes escapees took converged on their home before making the final trip north.

The Indianapolis 500 has been running almost every year since 1911.

A man called Ray Harroun took home the trophy, completing the race in 6 hours and 42 minutes – a far cry from the times it’s completed in today!

The race has been held every year since it began in 1911, except for the years during World Wars I & II.

The Speedway proudly claims the title of being the largest sporting venue in the world, with fixed seating for more than 250,000 people.

An event which went down in the history books, the first-ever baseball game held by the National Association of Professional Baseball Players was held in Fort Wayne, Indiana.

The game took place at night on May 4, 1871 and was held between the Cleveland Forest Cities and the Fort Wayne Kekiongas.

200 people gathered to watch the spectacle and Kekiongas won the match fair and square with a score of 2-0.

Indiana is rich, in minerals at least! 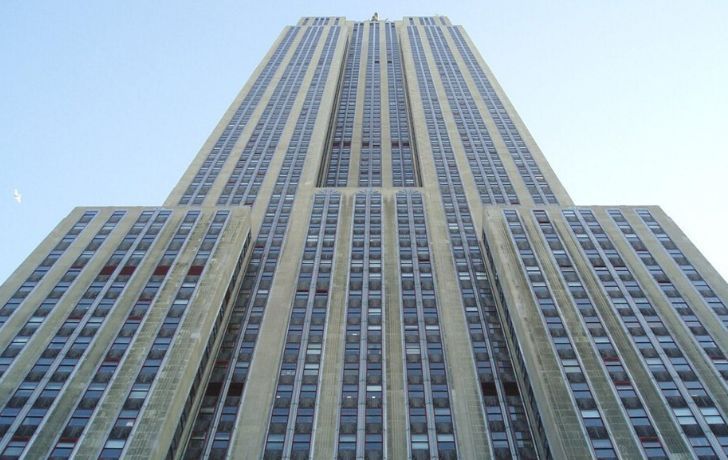 More specifically, limestone. Indiana is graced with one of the highest concentrations of limestone in the world.

In Indiana’s early years the mining of limestone made up a large part of the state’s industry, and rightfully so!

Indiana limestone has been used in many important and famous US buildings and monuments, including the National Cathedral, the Empire State Building and even the Pentagon!

The legendary bank robber John Dillinger once escaped from an “escape-proof” cell in Indiana. 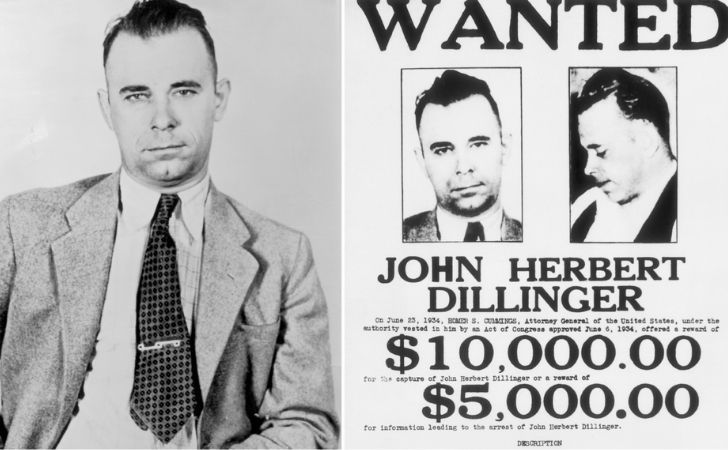 The notorious bank robber was actually an Indianapolis local, too.

Born and raised in the city, Dillinger was always getting caught up in one thing or another, whether it was a street brawl or petty theft.

He was first arrested for the armed robbery of a grocery store, after which he spent over 9 years in prison.

Just one month after his release he robbed his first bank, making away with $10,000.

By 1934, Dillinger and the gang he formed were still at their old tricks when they were arrested in Tucson, Arizona.

Dillinger was escorted back to Indiana where he was locked away in Crown Point, a so-called “escape-proof” jail. Shortly after his internment, he broke free.

The story gets a little bit vague at this point, with conflicting details. Some claim that he escaped with a gun which an accomplice smuggled in to him.

The most legendary story of Dillinger’s escape is that he carved a gun out of wood and painted it black with boot polish, fooling his way out and destroying the reputation of the local police force!

The founder of KFC is actually from Indiana, not Kentucky!

If you were to ask anyone where Colonel Sanders was from, the most common answer would be Kentucky.

Although Sanders was immortalized by his fried chicken business, he actually grew up in the town of Henryville, Indiana.

It wasn’t until he was honorably discharged from the US Army that he roamed around the states for a while, eventually opening what came to become KFC in Kentucky.

As a midwestern state, Indiana is quite often overlooked or dismissed as the state where the Indy 500 is held and little else goes on.

There’s so much more to the state than sports or farming though, with a fascinating ancient history that goes all the way back to the Ice Age!

Did you know that the first ever US train robbery took place in Indiana?

The Worst Military Leaders in History