Rawalpindi [Pakistan], Dec 14 (ANI): Day four of the first Test between Pakistan and Sri Lanka was delayed due to wet outfield on Saturday.
“Only 5.2 overs of play was possible on the third day and overnight rain has delayed the start of the fourth day. Sri Lanka are 282/6 with Dhananjaya de Silva just 13 runs away from a century,” ICC tweeted. 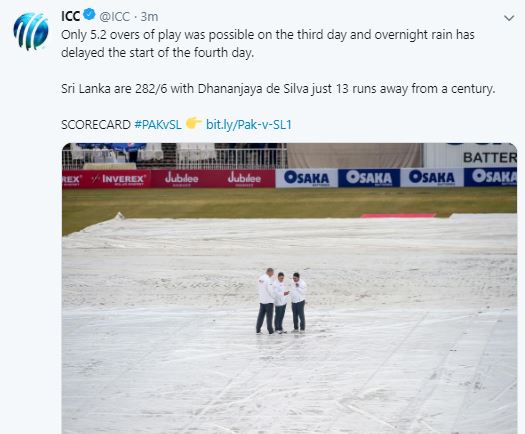 Yesterday, the play ended after less than half an hour of action. The visitors only added 19 runs without losing a wicket in 5.2 overs. Dhananjaya de Silva and Dilruwan Perera are unbeaten on 87 and 6 runs, respectively.
On Thursday, bad light played a spoilsport as only 20 overs were bowled. The visitors added 61 runs to their score and lost one wicket. Niroshan Dickwella was scalped by pacer Shaheen Shah Afridi after scoring 33 runs.
Dilruwan Perera joined Dhananjaya de Silva for a brief unbeaten partnership of 7 runs before bad light forced early stumps on the second consecutive day. For Pakistan, the only wicket was taken by Afridi.
The ongoing series between the two nations is part of the ICC World Test Championship. (ANI)