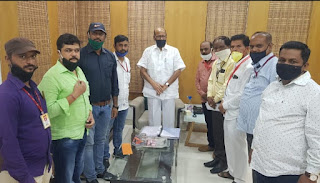 Satara: A delegation of Marathi Press Council and Satara District Marathi Press Association met NCP’s Sharad Pawar and Deputy Chief Minister Ajit Pawar today and demanded that senior journalists, writers and social activists be taken to the Legislative Council. Both leaders responded positively to the delegation.
Twelve seats in the Legislative Council will soon be appointed by the Governor. There is a demand from all over the state that only persons from the fields of literature, journalism, arts, social work etc. should be appointed to these seats. Maharashtra is the first and only state in the country where assault on journalists has been declared a non-bailable offense and the perpetrators have been sentenced to three years imprisonment. Penalties have been provided. Deshmukh is known as the father of this law. Whether the journalist has a pension or a journalist health scheme, otherwise there will be questions of small newspapers. He has also fulfilled his social responsibility. As a social worker, he has done a great job in Maharashtra Deshmukh has also done a lot of work in the field of literature and eight of his books have been published. Sharad Pawar responded positively.
The delegation that met Sharad Pawar included Sharad Pable, Working President of the Council, Bapusaheb Gore, Divisional Secretary, Harish Patne, President of Satara District Press Association, Sunil Lonkar, President of Pune District Press Association, Sharad Katkar, Working President of Satara District Press Association, Deepak Prabhavalkar, General Secretary, Vinod Kulkani, Sujit Ambekar Samadhan. Patil and others were included.

Is Death in Paradise season 10 release date confirmed yet? When can fans expect episode 1? – HITC