Mumbai : Chief Minister Uddhav Thackeray has announced that all places of worship including temples will be opened in the state from Padva. ‘Mangal Parva of Diwali has started. Abhyangasnan and Narakasur were also killed as per custom. Even if the hell-like chirati is broken, the smoke created by the corona-like narkasura throughout the year cannot be forgotten. Even if this monster is slowly getting cold, it will not go unnoticed. ‘ This is what the Chief Minister has appealed to the citizens.

‘The people of the state observed discipline during this period. That is why the position of Maharashtra has not gone out of hand as compared to other states. Maharashtra has always been blessed by saints, gods and goddesses. However, Holi, Ganeshotsav, Navratra and Pandhari did not take place as a precaution. Not only that, but other religions have also observed discipline regarding festivals like Eid and Mount Mary. ‘ That is also what the Chief Minister has said.

Although all places of worship were closed, ‘God’ in the guise of doctors, nurses, ward boys was taking care of the devotees in white clothes. God was with us, but now the government has decided to open all places of worship, including temples, on the eve of Padva tomorrow. But everyone has to strictly follow the rules and discipline. The main thing is to avoid crowds in the actual prayer halls and protect yourself and others. That is what the Chief Minister has said. 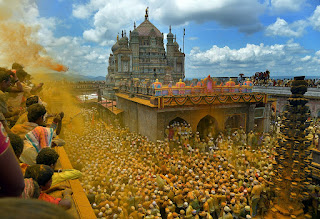 Stock market today: The market opened at the red mark, the market will be affected by these factors this week