Speaking on the occasion, MLA Sanjay Jagtap said that Chief Minister Poonam Kadam has done a great job in the jury and for the first time the jury has been nominated in the Central Government’s Swachh Bharat Abhiyan. He said that it is commendable that he has succeeded in this examination by fulfilling his responsibilities in the municipality.
Mayor Veena Sonawane and former corporator Hemant Sonawane expressed their views on this occasion. Poonam Kadam said that even if she failed in the exam, she tried hard again with an understanding of her mind and said that success is guaranteed.
Mayor Veena Sonawane, Deputy Mayor Ganesh Nikude, Group Leader Sachin Sonawane, Corporator Mahesh Darekar, Suresh Satbhai, Ajinkya Deshmukh, Ganesh Shinde, Corporator Pournima Raut, Rukmini Jagtap, Sheetal Beas, Vrushali Kumbhar etc. were present on the occasion. The Chief Minister was also honored on behalf of the staff. 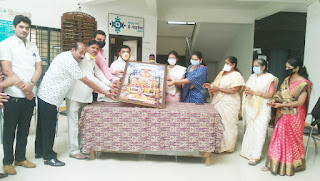 Ahmedabad: Violations of law and order, birthday celebrations in public and videos of firing go viral