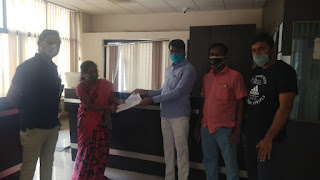 Jejuri: Accidents on Jejuri-Saswad Road in front of Mahi Petrol Pump in Lavathaleshwar area of ​​Jejuri have not been noticed by the concerned department officials and many people have lost their lives due to this inactive and irresponsible National Highway officials. Citizens of Lavathaleshwar have demanded the Chief Minister to file a case of culpable homicide. The Jejuri police station and the Jejuri municipality should immediately send a letter to the National Highways Authority of India (NHAI) and set up a roadblock, otherwise many will die. A woman has died in an accident and a young Jeevan Das Koli from Jejuri died on the spot today. Fifteen to twenty accidents have taken place here during the lockdown. Three people have died in the accident. Shere, Dada Mulani, Ajit Bhongale, Shamkant Bho Gale, Sahir Sheikh, Hanumant Beas, etc. were pursued but many have lost their lives as the construction department ignored it and the citizens of Lavathaleshwar have demanded to file a case of culpable homicide against the concerned department officials, Jejuri police station and municipal administration. The women sisters and citizens of the area have also demanded that serious speed bumps be installed on the accident area without paying any attention to this.

Big decision taken by the government: Now farmers will get higher price, increased MSP for this crop to Rs 375