JEJURI: The Jejuri Municipality is committed to provide all kinds of civic amenities to the citizens of Maharashtra’s Goddess Khandoba Malhar. The Purandar Haveli MLA Sanjay said that a modern vegetable market for women, citizens and farmers of Jejuri will be started soon at the weekly market in Jejuri. Jagtap said
MLA Sanjay Jagtap inaugurated a modern vegetable market at a cost of Rs 1.5 crore and a closed nallah at a cost of Rs 55 lakh in the Vidyanagar area of ​​the city on behalf of Jejuri Municipality. Speaking on the occasion, MLA Sanjay Jagtap further said that funds will be made available by the government to provide various civic amenities to the citizens of Malhari Deva, two to three new projects will be started. The city is pursuing to get permanent water from Veer Dam.
Veena Sonawane, mayor of Jejuri municipality, said the women were suffering due to mudslides in the rainy season in Jejuri’s weekly market. Both these works have been undertaken on behalf of the municipality and it will be completed in four to five months.
Chief Officer Poonam Kadam, Deputy Mayor Ganesh Nikude, Group Leader Sachin Sonawane, Corporator Ajinkya Deshmukh, Mahesh Darekar, Suresh Satbhai, Ganesh Shinde, Health Department Chairperson Pournima Raut, Construction Chairperson Rukmini Jagtap, Corporator Sheetal Beas, Vrishali Kumbhar, Former Municipal Servant Hemant Sonawane, Yogesh Jagtap, Mehboob Pansare, Sushil Raut, Anil Virkar, Ishwar Darekar, Praveen Jagtap etc. were present. 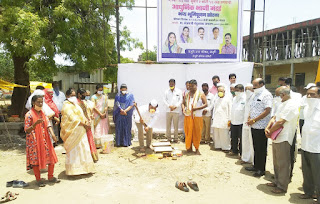 When is episode 4 released? How many episodes in total?

Dementia is largely a disease of old age, but a new study finds that up to 5% of all cases