New Delhi (India), Dec 19 (ANI): The first glimpse of Kangana Ranaut’s upcoming film ‘Panga‘ was released on Thursday.
Last seen in ‘Judgementall Hain Kya’, Kangana Ranaut is playing the role of Kabaddi player Jaya Nigam in the sports drama.
Bankrolled by Fox Star Studios, the 32-year-old actor will be playing the role of a mother.
Kangana Ranaut’s sister Rangoli Chandel revealed the first look from the film, where the ‘Queen’ actor is seen in a pink colour salwar in all smiles peeking down from a balcony.
Along with the poster, Rangoli tweeted, “Kangana when she was new biggest insult to an actress was to be approached for Maa ka role, it deeply disturbed her, after playing a mother in successful Manikarnika she is all set to be a mother again. Today mainstream young top actress at the peak of her career proudly plays maa ke roles and India loves, this is new India #Panga #24thJanuary.” 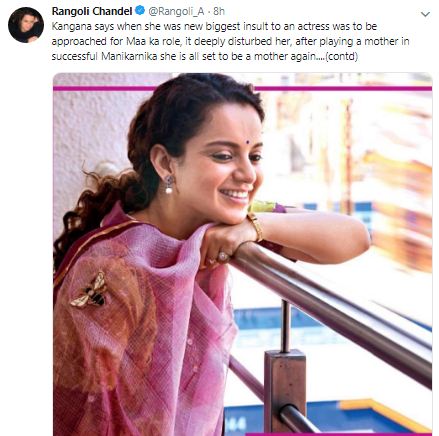 Milla Jovovich on daughter Ever’s dream to be an actress

DATA STORY: China and India have the largest army, find out who is in the top-10 countries in the world

Georgia Gov. Kemp Reportedly Shot Down a Request From Trump to Appoint Electors for Him Instead of Biden, Sparking Twitter Battle

Harsimrat Kaur, who resigned from Modi government in protest of agriculture law, has difficulty in breathing and has been admitted to hospital.

Georgia Gov. Kemp Reportedly Shot Down a Request From Trump to Appoint Electors for Him Instead of Biden, Sparking Twitter Battle

Perdue Down in Polls to Leftist Idiot Jon Ossoff — Maybe He Should Stop Slamming Trump?

Alwyn Cashe Will Receive The Medal Of Honor

Milla Jovovich on daughter Ever’s dream to be an actress

ADVERTISEMENT Los Angeles, Dec 6 (IANS) Resident Evil star Milla Jovovich has been acting and modelling since she was 10.